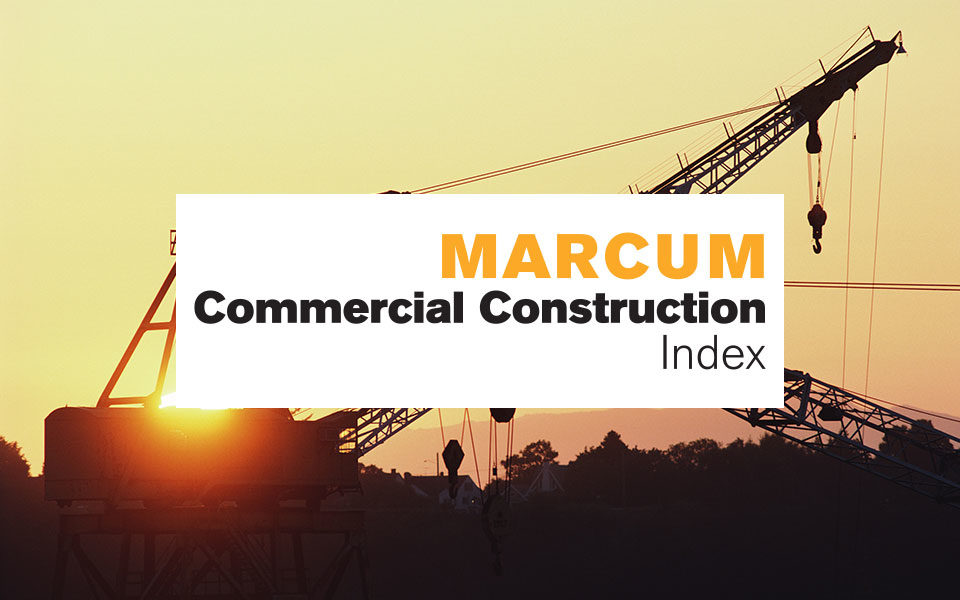 New York City, NY – The Marcum Commercial Construction Index for the third quarter of 2019 finds the industry in overall good health as 2020 approaches, despite some causes for concern. Entitled The Good, The Bad, and The Ugly, the report is produced by Marcum LLP’s Construction Services Group.

“Despite the lack of a coherent federal infrastructure strategy and the looming insolvency of the Highway Trust Fund, there is no recession in infrastructure spending in America,” wrote Anirban Basu, Marcum’s chief construction economist and author of the report. “The five fastest expanding segments are all primarily publicly financed, while ten of the eleven slowest growing segments are primarily privately funded, including the commercial segment, which encompasses retail space.”

In contrast, the report identifies several factors related to construction employment putting downward pressures on the industry. These include the continued lack of qualified construction workers to fill a historic high level of available construction jobs, which in turn is driving labor costs and producer prices higher. Key indicators in these areas include:

In addition, the quarter also saw a marked softening in private nonresidential construction, which declined 5.7% on an annualized basis.

“Demand for human capital remains high. According to Associated Builders and Contractors’ Confidence Indicator, more than 59 percent of surveyed contractors intend to increase staffing levels during the six-month period from the onset of 2019’s final quarter to the end of 2020’s first,” Mr. Basu writes.

Debt levels – corporate, governmental, and consumer – have risen massively, says the report, due to the low interest rate environment and continued economic confidence. But while businesses have begun to slow their spending, consumers haven’t, which will translate into slower job growth and higher consumer exposure, the report predicts.

Mr. Basu sees a confused outlook for the economy. He notes a sputtering global economy and pending recession in the U.S. manufacturing sector, against a surging stock market, strong corporate earnings, hopes for a trade deal with China, and three Federal Reserve rate cuts.

“Given the susceptibility created by enormous levels of indebtedness and elevated asset prices, there is still a chance that the economy will enter recession late next year or in 2021, which would create a new breed of challenges for many contractors at some point in 2021-22,” he cautions.

About Marcum LLP
Marcum LLP is a top-ranked national accounting and advisory services firm dedicated to helping entrepreneurial, middle-market companies and high net worth individuals achieve their goals. Marcum offers industry-focused practices with specialized expertise to privately held and publicly registered companies, and nonprofit and social sector organizations. Through the Marcum Group, the Firm also provides a full complement of technology, wealth management, executive search and staffing, and strategic marketing services. Headquartered in New York City, Marcum has offices in major business markets across the U.S. and select international locations. Marcum is committed to the advancement of diversity, equity and inclusion. The Firm is a founding member of LEA Global and is the exclusive U.S partner firm of ECOVIS International. Ever wonder where the people with all the answers get all the answers?  #AskMarcum.