As a result of the 2017 Tax Cuts and Jobs Act (TCJA), the 2020 Coronavirus Aid, Relief and Economic Securities (CARES) Act and the Build Back Better tax legislation currently being considered in Congress, business owners have a lot to think about when determining whether their business entity choice is the most advantageous for tax purposes.

Current Legislation:
The TCJA resulted in a dramatic decrease in corporate tax rates from a maximum rate of 35% to a flat 21%. While on the surface the significant drop in rates is appealing to those contemplating conversion to C-corporation status, business owners must also consider their personal tax rates when assessing the benefits of conversion. The issue of double taxation on corporate distributions continues to burden shareholders. C-corporation income is taxed at 21% at the corporate level when earned and then is taxed again when distributed to the shareholders, or when the corporation is sold, at a rate of 20% for most dividends and stock sales, and as high as 37% for certain dividends or sale transactions. This second level of tax can be significant for companies sold at a premium over book value.

In addition, dividends and gains are currently subject to a net investment income tax at the individual level, at a rate of 3.8%. Companies that intend to retain profits may benefit from the lower 21% tax rate. If selecting C-corporation status, management should keep in mind that there might be an accumulated earnings tax, essentially a penalty tax on undistributed profits.

The elimination of the corporate alternative minimum tax (AMT) was an additional change as part of tax reform under the 2017 TCJA. This section of the act repealed the AMT and allowed corporations to claim outstanding AMT credits (subject to certain limitations) for years 2018 – 2020. For 2020, any AMT credits still outstanding should be fully refunded.

Proposed Legislation:
During the 2021 tax year, several tax proposals have raised additional factors to be considered when making decisions regarding entity selection. Furthermore, several of the CARES Act provisions that were specifically beneficial to businesses operating as C-corporations are set to expire.

The House Ways and Means Committee’s tax proposals for the Build America Back Better legislation do not mention a change to the corporate tax rate, as was proposed in an earlier bill. However, a new corporate minimum tax has been proposed in the most recent bill. The proposed legislation will impose a 15% tax on large corporations with profits over $1 billion dollars. Additionally, a 1% surcharge would be assessed on corporate stock buybacks.

Also included in the bill is a 15% country-by-country minimum tax assessed on the foreign profits of U.S. corporations in an effort to minimize the tax benefits of shifting profits and jobs offshore. These profits would be taxed at a 15% rate, and there would be a penalty rate imposed on foreign corporations that do not comply.

Current Legislation:
Unlike their C-corporation counterparts, pass-through entities and sole proprietorships are (usually) not taxed at the corporate level and, therefore, may be attracted by the 21% reduced corporate tax rate introduced by the TCJA. However, if a company intends to pay dividends or could be sold within a relatively short period, a conversion to C-corporation status may not be ideal because of the two levels of taxation.

The Qualified Business Income (QBI) deduction was introduced as part of the TCJA and allows business owners the opportunity to deduct up to 20% of income taxed at the individual level (i.e., self-employment income, income from pass-through entities). For example, an owner of a qualified trade or business is taxed at a marginal rate of 37% but allowed a 20% deduction on qualified income, bringing the effective rate on non-corporate earnings down to 29.6%. Although this rate is higher than the 21% corporate rate, the double taxation issue mentioned above is no longer a factor.

One of the wrinkles of this deduction relates to businesses considered to be specified service trades or businesses (SSTB). For purposes of QBI, these businesses are limited in the amount of the deduction that can be taken. Health, professional and consulting services are just some of the types of businesses that fall into the SSTB category. High-earning taxpayers owning a business deemed to be a SSTB are subject to deduction limitations. The SSTB earnings limits for 2021 are $429,800 (for those Married Filing Jointly) and $214,900 for all other filing statuses. In addition, all businesses may be limited in the amount of their QBI deduction based on wages and capital assets.

Individuals, trusts and estates are also currently subject to net investment income. Under current law, this income does not typically include investment income derived in the ordinary course of business where the taxpayer is actively involved. Excluded income includes S-corporation earnings of active owners. As part of the proposed Build Back Better legislation, a net investment income tax of 3.8% would be expanded to include investment income and S-corporation earnings derived in the ordinary course of business, for taxpayers with taxable income greater than $500,000 for joint filers ($400,000 for single). This rule will also apply to trusts and estates.

Note: This article was drafted prior to any official legislation being passed during 2021. Companies need to monitor changes, create projections and models and talk to their advisors to understand how possible changes tax legislation could affect their businesses.

Tax legislation has changed a great deal over the past few years and will continue to change in the future. On the surface, the TCJA’s reduction in corporate tax rate may seem appealing for businesses considering C–corporation status. There are, however, various additional tax considerations that must be taken into account in the decision-making process. In addition to the factors associated with longstanding tax law and the reform connected with the TCJA, the CARES Act provides new benefits for C-corporations with net operating losses from prior years and potential losses in future years.

The final version of the Build Back Better plan could also produce additional modifications in tax law. If business owners analyze the effects of the many factors described above, they may find establishing or converting to C-corporation status is the best answer for limiting taxes. If this is the case, owners should contemplate the overall costs of legal documentation and tax filings as well as registration fees. Modeling scenarios to determine the tax implications of entity choice for both operating and selling a business should be done before any final decision is made. For further insight into how current and future tax legislation impacts your business, consult your Marcum tax professional. 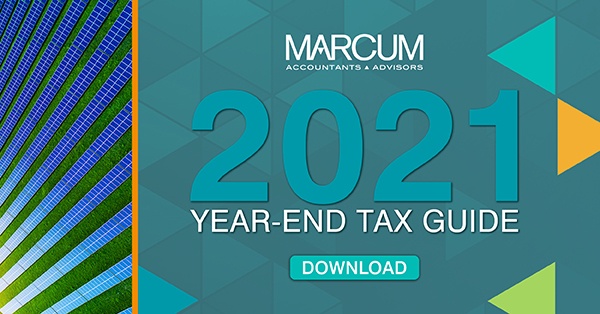